§  Remarkable track record for the Volkswagen ID. R in 2018

§  Pikes Peak and Goodwood record-breaker picks up another award

§  US magazine Autoweek acknowledges its “Motorsport Moment of the Year” 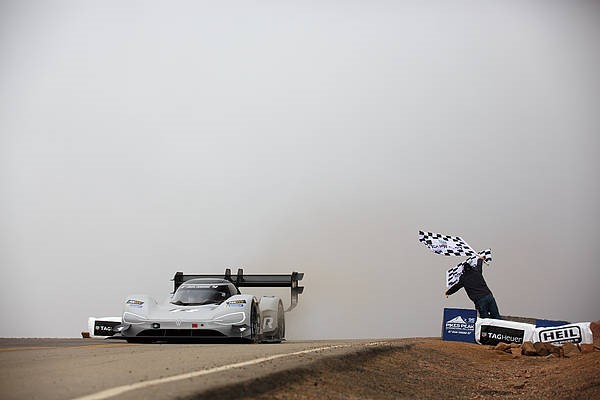 Wolfsburg (02 January 2019). Two records and half a dozen awards: the pioneering Volkswagen ID. R electrified the motorsport world in 2018 and impressed editors, experts and fans alike. The ID. R’s sensational, record-breaking run on Pikes Peak has now received more recognition – the “Motorsport Moment of the Year” award, courtesy of American magazine Autoweek: “The Pikes Peak International Hill Climb has been around for more than a hundred years. Plenty of records have been set, and plenty of teams have come away with improbable wins. But this year, an electric Volkswagen dominated every other car on the hill – and with a record time to boot.“

So, what exactly was that moment, which made such an impression on the good people at Autoweek? Well, on 24 June 2018, Romain Dumas (F) completed the iconic 19.99-kilometre hill climb on Pikes Peak – the legendary “Race to the Clouds” – in a time of 7:57.148 minutes, at the wheel of a fully-electric sports car from Wolfsburg. That made the ID. R the first electric car to be both faster and better than all the cars with conventional combustion engines that had gone before it. It is also the first car ever to complete the 156 corners and 1,440-metre ascent to 4,302 metres above sea level in under eight minutes.

“The moment when Romain Dumas crossed the finish line at the summit of Pikes Peak, and when the time for his run was confirmed, is one of the biggest in the history of Volkswagen in motorsport,” said Sven Smeets, Volkswagen Motorsport Director. “The fact that Autoweek has now recognised this moment with an award is a great honour for us. It also shows that Romain and the ID. R achieved something outstanding and pioneering, which is attracting attention from all over the world. On Pikes Peak, we wanted to show what is technically possible with a fully-electric drive – and we did just that. This was an emotional experience not only for the entire team, the engineers, mechanics and technicians, but also for a wider public.”

The record on Pikes Peak at the end of June was followed by another in mid-July: Romain Dumas (F) set a new record for electric vehicles at the Goodwood Festival of Speed (GB), with a time of 43.86 seconds. Dumas smashed the previous electric record from 2013 by 3.48 seconds, narrowly missing out on the all-time record, set by Nick Heidfeld (D). In 1999, Heidfeld completed the 1.86-kilometre sprint in 41.6 seconds with a McLaren-Mercedes MP4/13 Formula 1 car.

The two records on Pikes Peak and at the famous Goodwood Festival Speed were followed by another half a dozen trophies: the ID. R was twice named “Race Car of the Year” – by British BBC Top Gear Magazine and German magazine Auto Bild Motorsport. Its powertrain also won the “Dewar Trophy”, presented by the Royal Automobile Club in London (Great Britain), the “Motorsport Race Technology of the Year” award at the Professional Motor-Sport World Expo in Cologne (Germany), and the “Race Powertrain of the Year” award at the World Motorsport Symposium, which is run by British magazine Race Tech. Autoweek’s recognition of its involvement in the “Motorsport Moment of the Year” means the ID. R has now received six awards in less than six months.