In an interview posted on the series’ website, the legendary Italian rider said he has enough motivation and desire to continue, but he still is conflicted about the lack of evaluation time he’ll have after a disappointing 2019 season. 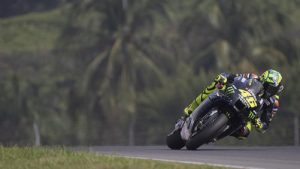 The nine-time world champion was seventh in points last year with two podiums, his lowest total since 2012, and he’d intended to take the first six races to decide on his future. The layoff from the novel coronavirus (COVID-19) pandemic will complicate that timeline.

“It’s very important to understand the level of competition because especially in the second part of (2019), we suffered very much and too many times I was too slow, and I had to fight outside of the top five,” Rossi, who is entering his 19th season in MotoGP’s top division, told MotoGP.com and MotoGP commentator Matt Birt. “In my mind, I had another year with the factory team and I needed time to decide and for me, I need like five or six races, with the new chief mechanic, and some modifications in the team to understand if I can be strong.

“The problem is that there’s no racing. So with the virus, we cannot race. So I will have to decide before racing because in the most optimistic situation we can race in the second half of the season, so August or September we hope. But I have to make my decision before. But anyway I want to continue but I’ve had to make this decision without any races.

“It’s not the best way to stop because the situation is that maybe we don’t race in 2020. So it’s fairer for me to do another championship and stop at the end of the next, so I hope to continue in 2021.”

Rossi likely is in his last season with Monster Energy Yamaha as teammate Maverick Vinales will be joined in the premier class by Fabio Quartararo in 2021. “The Doctor” could move to another Yamaha team for a farewell season next year, though.

Rossi won’t be racing Sunday as MotoGP returns to the simulation world with its third virtual GP. A lineup of 11 drivers, including defending series champion Marc Marquez, will race the Virtual Spanish GP on the MotoGP 20 video game.

This will be MotoGP’s the third virtual event and the first to feature all three divisions as the premier class is joined by Moto2 and Moto3.