Max Verstappen put his tumultuous season to one side taking a dominant victory in the final Grand Prix in Malaysia, as Red Bull Racing took their second successive win at the Sepang International Circuit. 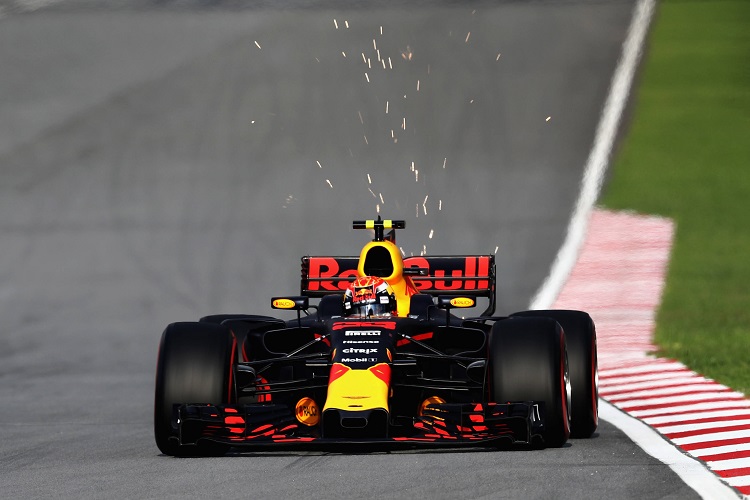 Mercedes-AMG Petronas Formula One Team driver and championship leader Lewis Hamilton extended his advantage to 34 points, taking second place ahead of Daniel Ricciardo. However, Sebastian Vettel provided a stunning comeback drive to claim fourth from last on the grid in an overly difficult weekend for Scuderia Ferrari.

Similarly to the Singapore Grand Prix a fortnight ago, chaos ensued before the race start. However, it wasn’t in the form of adverse weather – Kimi Räikkönen had to be pushed into the garage due to another Ferrari turbo issue, causing the Finn to cede his second place on the grid.

Worse for Räikkönen, Ferrari couldn’t get his car ready in time for the start meaning the bemused 37-year-old was condemned to a second early visit to the press pen in as many races.

Starting from pole, Hamilton made a solid start, with Verstappen having to fend off team-mate Ricciardo and the second Mercedes of Valtteri Bottas into the perilous, looping Turn 1. Verstappen and Bottas continued to fight on the run up to Turn 4 with Ricciardo observing, but the Dutchman crucially kept his nose in front.

Further back, Vettel had started to thread his way through the slower traffic finding himself in twelfth at the climax of the first lap.

Despite the battles going on behind, Hamilton couldn’t scamper away with Red Bull finding their blistering Friday morning pace again. Verstappen utilised DRS in order to try a move into Turn 1, forcing his way through on the inside before holding his ground into and out of Turn 2.

Mercedes were having troubles, as Ricciardo followed his team-mate’s lead, trying to pass Bottas on the outside of Turn 1. Bottas stayed strong, however the Australian wasn’t to be denied, getting past on the inside of Turn 4 for the final spot on the podium.

Bottas struggled for pace all weekend, the consequence being that the leading pair had built up a ten-second lead to Ricciardo on third.

Vettel continued his quest for big points on the soft compound tyres, dispatching Fernando Alonso and Kevin Magnussen in quick succession, before the early stoppers further released him.

Ricciardo’s battle with Bottas had started to take the best out of his tyres, complaining of understeer from the front and an absence of traction from the rears.

With Vettel having now passed the Sahara Force India F1 Team car of Sergio Pérez for fifth, Hamilton felt the need to shed his graining super-soft tyres on lap 26, managing to stay in third, ahead of the now squabbling Vettel and Bottas.

Verstappen was the next to make his sole stop rejoining in second, gifting the lead – albeit briefly – to Ricciardo.

Two laps later, Ricciardo passed the ascendency back to Verstappen and Hamilton. The Australian tried to make ground on the Briton to no avail, his attentions turned to Vettel once the German leapfrogged Bottas after the two had completed their pit-stops.

Setting lap record after lap record on his set of super-soft tyres, Vettel closed in on Ricciardo very quickly, trying a move going into Turn 1, only to see the door forcefully closed by the Red Bull. His chance gone, the Ferrari driver saw his tyre advantage fall away, finishing a long fifteen-seconds off of the solid Ricciardo.

Solid and unerring, Verstappen controlled the pace at the front, maintaining his ten second lead to Hamilton who seemingly had no desire to provide a late charge. It gave the Dutchman a chance to rest his neck in what had been a race played out at a swift pace.

The chequered flag prompted a full-blown sigh of relief from Red Bull and tears from the flock of Dutch fans in the grandstands. Verstappen’s second career victory had been a long time coming, 505 days after his even more impressive win in Spain last year.

Bottas wandered home nearly a minute behind Verstappen in a distant fifth to cap off a peculiar weekend for him, dropping out of sure-fire championship contention in the process, ahead of Perez, who put recent illness behind to take a good set of points for Force India.

Alonso couldn’t quite make the points in eleventh, but finished ahead of the Haas F1 Team duo Kevin Magnussen and Romain Grosjean.

Pierre Gasly impressed on his Formula 1 debut despite a lowly fourteenth placed finish, with the Renault Sport Formula One Team and Sauber F1 Team duos rounding out the classification.

A baffling incident on the cool-down lap saw Stroll and Vettel make contact at Turn 5, shattering the left rear corner of Vettel’s Ferrari, meaning that he had to get back to the pits courtesy of his compatriot Pascal Wehrlein.