Red Bull’s gushing praise of Honda has continued in the wake of their first season together.

Having become fed up with a lack of reliability and performance from Renault, the Milton Keynes-based outfit took the gamble with the Japanese manufacturer, who had shown strong progress with their junior team at Toro Rosso in 2018.

And while results didn’t really improve, as Red Bull often remained the third-best team, there has certainly been enough signs that the new partnership can be successful. 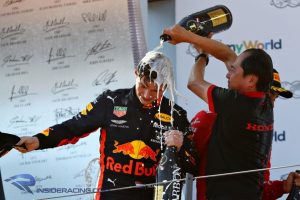 “We’ve had a really good car at a lot of circuits this year and the progression with Honda, along with developments from our fuel partner Exxon Mobil, has been a real collaboration and yielded positive results,” team boss Christian Horner commented.

“Honda’s first victory at our home race in Austria brought a phenomenal amount of emotion for everyone involved. Honda worked so hard to achieve this, they had a tough time coming back into Formula 1 in the hybrid era and the dedication we have seen from them was rewarded with that first victory.”

The Briton also couldn’t help but take a little dig at Renault, without mentioning them directly, when reflecting on Honda’s continued progression.

“This is the first year for a long time where what was promised has been delivered,” he declared.

“It’s a different type of partnership, it’s a true partnership and you can see what it means to Honda when they get a result: the emotion, the pride, the satisfaction throughout the whole business.”

Also important going into 2019 was the type of relationship Honda built with Max Verstappen, with the Dutchman among those most peeved off with Renault at the end of their partnership.

And based on the 22-year-old’s evaluation, it appears he is more than happy with the Japanese company.

“I think it went very well,” he said of his first year working with Honda.

“The beginning is always guessing what they’re going to bring throughout the year, but I think they’ve made some really big improvements.

“What was very important compared to what we have before was the reliability. This year, we never retired because of a Honda issue and if you want to fight for a World Championship, that is what you need,” Max added.

“So I am very, very impressed with the way they are working.

“I really love working with them because they are people of not too many words – and that’s exactly like me! But very focused on what they have to do.

“I just really, really enjoy working with them. They are very professional.”

Looking ahead to 2020, however, there is still one area Verstappen hopes to see Honda make some gains compared to their rivals.

“I think, qualifying, it depends a bit on the track layout,” he noted. “From one to the other weekend between the three teams, it is close, but it shuffles around a little bit.

“We are in a good place but, of course, we always want more. So there’s still quite a bit of work to do.”