Skip to content
Achingly beautiful and rich in racing pedigree, we reckon the 037 Stradale could be the most proficient hertige-laced Lancia you can buyOne of 207 homologated road-going specials enabling Lancia to participate in the Group B World Rally Championship, this 1983 Stradale carries much of the same engineering responsible for Lancia’s rally dominance, courtesy of drivers Walther Röhrl and Markku Alen. These rare beasts don’t come up for sale very often, but we’ve found one here.

Serving as a su tccessoro the highly regarded Stratos HF, the 037 Stradale was always going to suffer culture’s ‘second album syndrome’. Even Lancia felt the pressure as they developed ‘Project 037’, calling upon the engineering and design talents of Abarth, Pininfarina and Dallara. Too many cooks may spoil the broth, but in this case the results spoke for themselves; and said something very much different.

Retaining the mid-engined layout from the Montecarlo, the 2-litre in-line powerplant took inspiration from the Fiat-Abarth 131 engine and was mounted longitudinally. This not only moved the engine’s weight forward, but also allowed more space for the complex quadrilateral suspension that surrounded it. Grip and balance were therefore second to none.

Unlike Lancia’s turbo-charged WRC competition, Abarth chose to endow the 037 with a Volumex Roots-type positive displacement supercharger that delivered nearly instantaneous boost pressure. Performance was measured at 205bhp upon 7000rpm and a 0-62mph in 5.8sec, without ever having to deal with turbo lag.

All that power was transferred to the rear wheels through a hydraulic single-disc clutch and a five-speed manual ZF gearbox so proficient that Walter Röhrl claimed the 037’s quick-shifting ability had carried it so admirably to WRC victory. Superior braking proficiency was delivered by a notably progressive brake pedal linked, in turn, to a Brembo 4-wheel disc system.

All elements combined, the 037 was nothing short of an incredibly competitive, well-honed thoroughbred. In addition, the model was also stunning to look at with Kevlar reinforced fibreglass bodywork that opened in clamshell fashion to allow mechanics quick and easy access to the complex mechanicals beneath.

A tube-frame chassis kept the overall weight low, while Abarth added the double-bubble roof to accommodate racing helmets; just as they’d done with many of their 1950s and 1960s racing cars. Inside even the road-going Stradale, passenger-centric gauges and an integrated roll cage serve as authentic reminders of the 037’s WRC glory days. 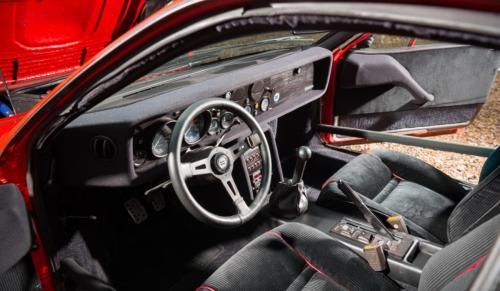 This Stradale has spent the majority of its existence in France, with the original license plate ’79 GFY 75’ still etched on the windows. Having competed in the Rallye de Thiers as well as the Mont-Blanc and Coupe des Alpes regularity rallies, chassis 111 was acquired by Girardo & Co back in 2017.

This Stradale has benefitted from mechanical works totalling to €21,900 ($25k), including a top-end engine rebuild and an overhaul of the supercharger, brakes and suspension. New fuel tanks, radiator, front dampers and fresh tyres have also been fitted all-round. In addition, extremely rare and original trim has recently been sourced and installed within the cabin.