Just a month after the drama of Le Mans, the FIA World Endurance Championship resumes with the 6 Hours of Nürburgring, with considerable domestic interest in the event with five German drivers representing four different teams. 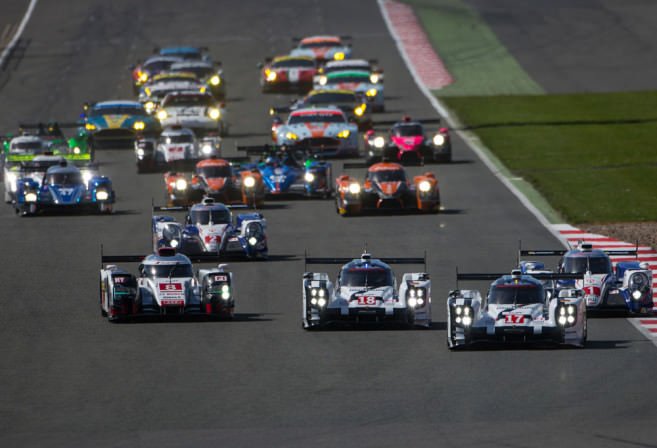 Defending WEC World Champion Timo Bernhard won the inaugural 6 Hours of Nürburgring last year and will be hoping for a repeat showing after a tough start to the season. Bernhard’s Porsche team-mate Marc Lieb currently leads the points after winning the Le Mans 24 Hours alongside Romain Dumas and Neel Jani, the latter one of eight drivers in the field from just across the border in Switzerland.

34-year-old André Lotterer will also be looking to hit back for Audi on home turf losing victory at Silverstone to a post-race exclusion, and enduring an uncharacteristic troubled Le Mans. Rebellion Racing’s Nick Heidfeld will seek to extend his championship lead over the ByKolles Racing Team and Nürburgring local, Pierre Kaffer.

Porsche will revert to their third and final aero-kit configuration for the WEC season. Now leading the drivers and manufacturers championship, Porsche spent a productive four days testing their high-downforce package at the Circuit de Catalunya.

“The data from the test, as well as the feedback from Romain Dumas, Marc Lieb, Brendon Hartley and Mark Webber was promising”said Porsche Team Principal Andreas Seidl.

“The majority of the modifications are covered by the bodywork, while the new look of the car’s front is obvious.”

After shaking off their tragic Le Mans defeat, a very different TS050 HYBRID will be in action this weekend. Compared to the low-downforce version used so effectively at Le Mans, an ultra-high-downforce aerodynamic package will make its debut.

Updated front and rear bodywork has been developed in the wind tunnels at Toyota Motorsport GmbH in Cologne to generate additional downforce at the cost of top speed, a combination which is better suited to the demands of the upcoming WEC circuits and in particular the tighter, Formula 1-specification Veedol Chicane.

“We want to put our Le Mans disappointment behind us, but first I would like to express my sincere thanks to all the fans, rivals and friends who sent us such touching messages of support over the last weeks” said Toshio Sato, Toyota Team President.

“We will not forget this. As a motorsport team, we want to race again and we do so with even more motivation and team spirit; the Nürburgring race is a great opportunity for us. It is also a home race which means we will have the support of plenty of our colleagues from Cologne. Last year there was a great crowd, so I hope we will again have packed grandstands and I am sure we can fight for the win.”

Audi too will be running a high-downforce configuration on their R18 that many expect will mirror their successful Silverstone package. Structurally, Stefan Dreyer will now move from LMP1 engine Project Leader to head of LMP, while Erik Schuivens (former Sauber and Mercedes F1) engineer will fill the shoes of the departing Leena Gade on the number 7 car.

With Benoit Tréluyer ‘s recovery expected to take several weeks, the 39-year-old Frenchman has to skip Round 4 of the FIA World Endurance Championship, requiring teammate s, Marcel Fässler and André Lotterer, to contest the 6 Hours of Nürburgring on July as a team of two in the number 7 Audi R18.