Fabio Quartararo waltzed yesterday’s Andalusian Grand Prix, dancing through the fieriest pit of hell with all the self-assurance of a young man who knows exactly where he’s headed. El Diablo’s second MotoGP victory in eight days confirmed the 21-year-old as 2020 title favourite and as France’s most successful premier-class rider in more than 70 years of world championship racing.

His performance was reminiscent of Jorge Lorenzo at the height of his powers during the final season of MotoGP’s Bridgestone era, when the Spaniard perfected the art of bolting from lights-out to lead every lap.

Quartararo’s secret is pinpoint accuracy and unerring consistency. Despite the hellish conditions – ambient temperature a suffocating 37 degrees, track temperature a sizzling 60 degrees – he never made one mistake of any significance and his pace varied by just a few tenths throughout.

And he led home a Yamaha one-two-three, perhaps signalling an end to the factory’s grimmest period in its almost 50 years in the premier class.

Yamaha utterly dominated the weekend, thanks in part to the smoky demise of Pecco Bagnaia’s Pramac Ducati, in a way that hasn’t been possible since the start of MotoGP’s Triple M period – Michelin and Magneti Marelli – in 2016.

How come? Because the YZR-M1 likes Jerez’s sweeping layout and because it has the friendliest front end of them all, a crucial advantage when front grip is so critical, as it was at Jerez. The combination of the tortuous track conditions and Michelin’s 2020 rear slick had riders on a knife-edge and caused plenty of front-end crashes last weekend and the weekend before. This year’s grippier Michelin rear can cause the front to push on corner entry and unload the tyre on corner exit. Therefore a friendly front end – which gives its rider advance warning of impending disaster – is what every rider wants.

“The front of the Yamaha is really good, so it’s not easy to lose the front, you just go wide,” Maverick Viñales told me last year.

Quartararo’s runaway victory – mostly three tenths a lap faster than his pursuers – hurt Viñales, a lot. While the youngster checked out, Viñales was left to fight it out with factory team-mate Valentino Rossi. The old warhorse made himself as wide as possible and used his aggressive braking style to keep the Spaniard behind him, where Viñales had to deal with a sky-high front-tyre temperature and could hardly breathe in the searing wake of Rossi’s M1.

Viñales is a huge talent, compromised by his temperament. While Quartararo is super-cool – all surf-dude hanging-loose hand signals – Viñales seems on edge. When everything goes to plan he is happy and relaxed, but the moment things go awry he loses it.

If the 2020 championship turns into a Yamaha duel – factory team versus indie team – Quartararo would seem to be the favourite. He is currently faster and more consistent, thanks to his coolness and his inch-perfect technique, which looks after the tyres better.

He is also the master at getting the maximum out of both tyres during braking. Riders now use the rear tyre a lot to slow the bike, which demands a tricky technique of loading the rear of the bike when they jump on the brakes.

“Fabio loads the rear tyre really well,” adds Viñales. “This is the most important thing I see when I look at his data.”

In fact Viñales has been trying to perfect this technique since late 2018, but he hasn’t mastered it like his young rival.

Quartararo is also more adaptable when he’s on track, so he is able to change his riding technique according to the grip available – lots of swooping corner speed when he’s got edge grip, a more point-and-squirt approach when he doesn’t.

Yamaha left Jerez happier than they’ve left a racetrack since the dawn of the Triple M era, but far from worry-free. Two engine failures during the first Jerez weekend – Viñales during practice and Rossi during the race – had the factory’s engineers in a panic. 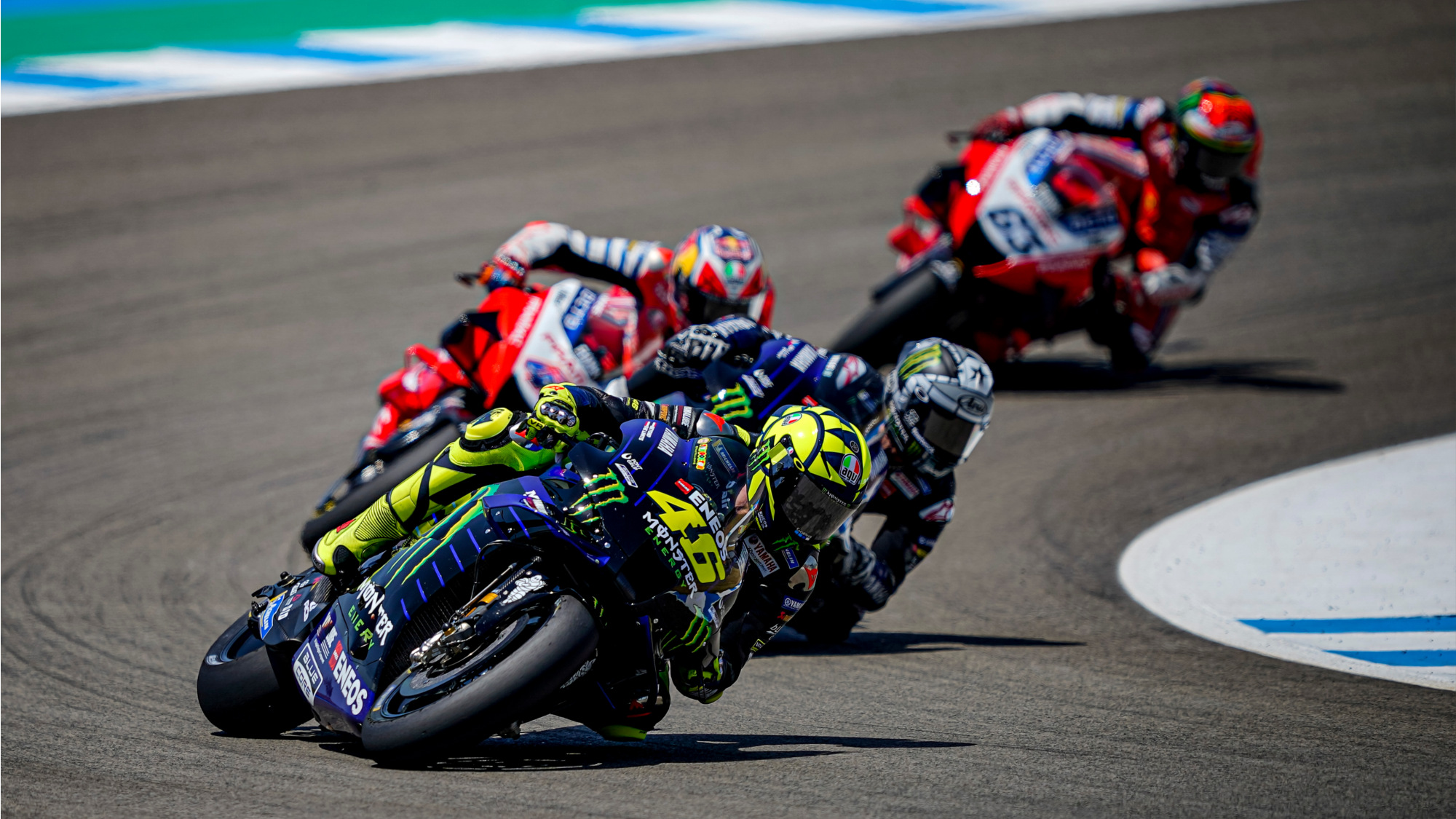 Rossi is back – leading Viñales, Miller and Bagnaia

Yamaha withdrew all eight engines used that weekend – two each for Viñales, Rossi, Quartararo and Franco Morbidelli – from service to be inspected with endoscope cameras. If they are passed okay they will be returned to the track, but last weekend all four Yamaha riders each used two new engines of their total allocation of five. This may or may not become a threat to Yamaha’s championship hopes, but already Viñales is one engine down on Quartararo.

Even if Yamaha doesn’t have engine reliability worries this season it already has horsepower concerns about the next few races. Ducati was strong at Jerez – where the Desmosedici is rarely in the running – and will be considerably stronger at Brno and Red Bull Ring, both horsepower tracks.

Ducati’s desmo V4 probably has an advantage of around 30 horsepower over the inline-four M1, which might explain why Yamaha is having engine issues. Yamaha engineers never stop working at reducing that deficit, but an inline-four engine simply isn’t as robust as a V4. The harder they work to increase power, the more likely the engines are likely to have problems.

And then there’s COVID-19 to worry about. The pandemic has been especially unkind to Yamaha. Look at the truncated calendar: Jerez, Brno, Red Bull Ring, Misano, Barcelona, Le Mans, Aragon and Valencia. After Jerez, where are all the tracks where the Yamaha’s corner-speed advantage can make a difference? There’s no Assen, no Sachsenring, no Silverstone and no Phillip Island.

Of course, the pandemic hangs over the entire paddock, threatening to interrupt or indeed end the season at any moment. Dorna and IRTA have done a great job salvaging a 13-round championship from the situation, but no one knows what effect local spikes and second waves will have. Will borders close again? Will local lockdowns get in the way? Literally no one knows.

This is a bizarre situation for the riders, because they don’t know whether they’re contesting an eight-race championship, a 13-round championship or even a 16-race championship if three yet-to-be-confirmed out-of-Europe races get the OK, which seems less likely by the day.

The obvious – but not so easy – answer to the situation is to get into the points lead at the start of the championship and stay there.

Rossi’s broken engine at round one was therefore the worst start for the 41-year-old. And even if he hadn’t stopped he wasn’t making the greatest start to his 25th GP season – in the lower reaches of the top ten, which was where he ended his 2019 campaign.

But several days of going through the data with new crew chief David Munoz changed everything. Rossi still wasn’t fast enough to win Jerez two, but he was fast enough to score his first podium since COTA 2019, ending a 15-month drought, the longest since he scored his debut season in 1996. And Rossi was consistently fast throughout, saving his tyres despite the vicious heat.

“At the first race we suffered too much and I was too slow,” he said. “Now we have improved. In the last years the riding style in MotoGP has changed very much. In a lot of places and in a lot of corners you need to do the right thing for the tyres, more than ride well.

“It’s not easy. I have a lot of experience but sometimes my experience is a problem, because you need an open mind and you need to change different things. We have changed the balance of the bike a lot, to try to enter corners faster – trying to use my style, while adapting to the modern style needed by these tyres. We have made a step compared to last year and we need to continue in this way.”

Yamaha will have a more difficult time at Brno. Quartararo, Viñales and Rossi will have their hands full with four GP20s of Andrea Dovizioso, Danilo Petrucci, Bagnaia and Jack Miller. How will they look after their tyres if they’re unable to use the M1’s preferred swooping cornering lines? And how will Quartararo react to the pressure of leading the championship?