Skip to content
Sebastien Loeb and Timmy Hansen have unveiled the new PEUGEOT 208 WRX ahead of the FIA World Rallycross Championship season opener in Barcelona this weekend.Team Peugeot-Hansen head into the 2017 slate of 12 rounds around the world looking to usurp champion Mattias Ekström and his reigning EKS RX team.They will be helped in their quest with the introduction of a one-piece engine sump that should see them battling it out at the front along with fellow contenders such as two-time champion Petter Solberg, Johan Kristoffersson and Andreas Bakkerud. 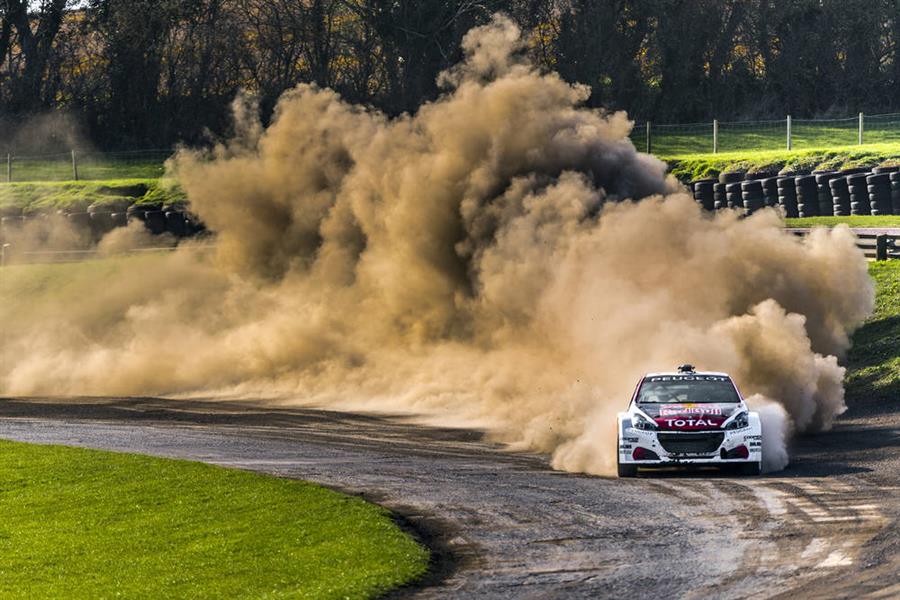 Other modifications from the ‘2016 plus’-specification 208 include revised bodywork that incorporates new aerodynamic elements together with a suspension and damper upgrade that leaves the new model at the maximum permissable width.

Loeb and Hansen know a strong start in Spain should put down a fearsome marker as the teams go on to visit three different continents ahead of the South Africa finale in mid-November.

FIA Rookie of the Year Kevin Hansen will also compete alongside his older brother and nine-time WRC winner Loeb, but back in the 2016 car as the 18-year-old looks to continue his meteoric rise following his FIA European Rallycross title last year.

With the latest spec featuring a striking new livery, the 2017 season promises to be a visual feast as Audi and Volkswagen have also pledged manufacturer backing alongside Peugeot and Ford.

Team Principal Kenneth Hansen enthused, “We have worked tirelessly all winter to make sure that the 2017-spec PEUGEOT 208 WRX is the best yet. We are in the fortunate position of having three of the championship’s best drivers in our team and, as long as we provide them with a car that inspires confidence, we know they are capable of producing extraordinary performances.”

Frenchman Loeb added, “Following our most recent test at Lydden Hill, I feel confident that the car has taken a step forward in practically every area, from the engine and chassis to the gearing and damping.”

Timmy revealed, “Barcelona as a circuit should suit us well. Last year, I was on pole position there in the semi-final and finished second in the final. I’m looking forward to starting the new season there.”

Kevin said, “Having trained hard with my brother Timmy all winter on both my driving and physical fitness, I feel better-prepared than ever as I embark upon my first full campaign at World Championship level.”

The FIA World Rallycross Championship presented by Monster Energy returns for its fourth season as the World Championship kicks off in Barcelona this coming weekend (1-2 April). With 18 permanent Supercars and a plethora of star-studded motorsport names including Mattias Ekstrom, Petter Solberg, Sebastien Loeb and Ken Block, the 2017 season is set to be the biggest and most exciting to date.

For the first time since its inclusion into the World RX calendar back in 2015, the season will begin in Barcelona instead of Portugal (Portugal will form round two in three weeks’ time). The F1 and MotoGP venue, Circuit de Barcelona-Catalunya, will host the World RX crews, as well as the official media day which will take place this Thursday (30 March).

As well as the headline World Championship category, the FIA European Rallycross Championship (Euro RX) will also take place in Barcelona for the first of its five-round campaign and will field a total of 32 Supercars. On top of the 18 World RX Supercars competing in the World Championship, that makes a total 50 Supercars – each capable of 600bhp and the ability to accelerate from zero to 60mph in less than two seconds. There will also be 11 TouringCars vying for the round one victory in the highly competitive rear-wheel drive support category.

There have been several changes in the team and driver line-ups ahead of the new season: six permanent two-cars teams will compete for the 2017 Teams’ Championship, while 18 permanent drivers will battle for the World RX Drivers’ Championship.

Details of where to watch the 2017 World RX TV show will be revealed at the official season launch on Thursday 30 March with a press release scheduled for the afternoon.

Monster Energy Super Charge Award
For the past three seasons, World RX drivers have been vying for the infamous Monster Energy Super Charge Award based on securing the race lead into turn one of the final. For 2017, however, the World Championship’s presenting sponsor is turning up the tension again by making the award all about reaction time – to win this year’s coveted award, it’ll be a case of fastest reaction to the lights.

From a Cooper Tires point of view
Paul Coates, General Manager – Motorsport, Cooper Tire Europe, commented: “In previous years the Barcelona track proved to be a challenge because of the high ambient and track temperatures coupled with a particularly abrasive paved section. This meant teams carefully managing the eight dry tyres each driver is allocated per event. In moving the event from September to the cooler month of April we will likely see some different tyre strategies from teams. However, with its fast tarmac corners and quick changes between tarmac and gravel we are guaranteed to see some exciting racing.”