IndyCar legend Alex Zanardi has suffered a severe head injury in a collision with a larger vehicle during a handbike race in his native Italy.

The Associated Press is reporting that Zanardi was transported by helicopter to Santa Maria alle Scotte hospital in Siena following the accident, which occurred near the Tuscan town of Pienza during a national race for Paralympic athletes. Zanardi is a four-time gold medalist in handbikes at the Paralympics. 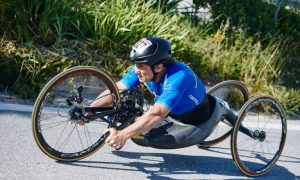 According to a bulletin from the hospital, Zanardi is undergoing “neurological surgery to reduce fracture and is in very severe conditions.”

Local newspaper La Repubblica Florence reports that the accident involved a collision with a truck.

“It happened on a slightly downhill straightaway just before a slight curve in the road,” national team coach Mario Valentini, who was following the race, told Repubblica. “Alex veered slightly into the oncoming lane just when a truck came. (The truck) tried to swerve but couldn’t avoid the crash.”

According to the Repubblica, Zanardi remained conscious until medical personnel arrived, and was breathing by himself.

“Twenty minutes passed from the time of the accident to when the medical personnel arrived. It took some time to load him (into the ambulance). His wife helped. After the accident he was talking,” the AP quotes Valentini as adding in a separate interview with local media.

Zanardi, 53, was IndyCar champion in 1997 and ’98 during the CART era with Chip Ganassi Racing, and also competed in F1 for the Williams, Jordan, Minardi and Lotus teams. He lost both of his legs to a crash during the 2001 CART race at the Lausitzring in Germany but subsequently emerged as a sports star again in the Paralympics, winning handbike gold medals in both 2012 and 2016. He also returned to racing in Europe’s DTM in 2018 and IMSA’s Rolex 24 at Daytona in 2019, competing in BMW GT cars specially modified with hand controls.

Mario Andretti tweeted: “I am so anxious and frightened about Alex Zanardi that I’m holding my breath. I am his fan. I am his friend. Please do what I’m doing and pray for this wonderful man.”

More details on this story as they become available.