Skip to content
With just over six months to go before the start of the Kenya Airways Safari Classic Rally in Mombasa, Kenya, many of the entrants and their teams are taking the opportunity to go out on events and shake off a few cobwebs. 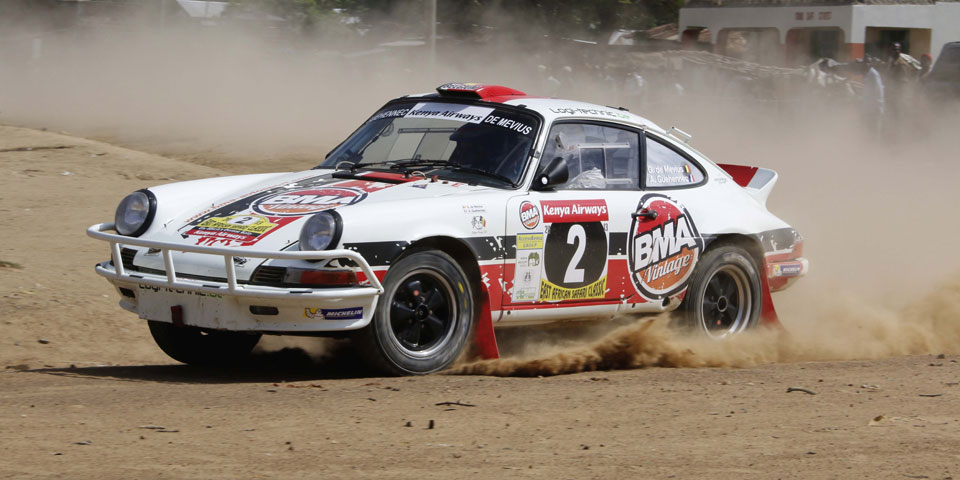 In Belgium, the BMA team have been particularly busy. Not only are they running modern Skoda Fabia S2000s for Freddy Loix, Belgian Rally Champion in 2013 and 2014, and German driver, Mark Wallenwein, but they are also entering a Porsche 911 on selected events for team principal, Bernard Munster. Currently, Loix has won two of the three Belgian Championship rounds – by winning the TAC Rally last weekend, his list of outright wins now totals thirty-nine – and he lies second in the 2015 struggle for the Belgian title.
Munster’s Porsche 911 is basically the same car that he will drive on the Safari Classic in November and in which he, partnered by Andrée Hansen, finished in third place on the Legend Boucles at the end of February. This was after initially dropping to thirty-second place overall after being a little too fast on a regularity stage and checking in too early at the finish. BMA have four Porsche 911s entered for the Safari Classic with the three drivers already nominated – Bernard Munster, Gregoire de Mevius and François Kicq – all having already driven BMA Porsches on the 2013 Safari Classic. BMA have entered six Porsche 911s for Yves Loubet’s Rallye du Maroc Historique in mid-May with their lead car being driven by Bernard Munster and co-driven by the man who is also reading the pace notes for Loix in the Skoda, Johan Gitsels.
In the Legend Boucles, two ubiquitous Ford Escort Mk2s won the day and Phil Mills of Viking Motorsport is hoping that his Escorts, prepared in their workshop in mid-Wales, will be equally successful on the Safari Classic. Viking have four Escort Mk2 RS 1800s entered all with drivers who have Safari Classic experience. John Lloyd is an old hand and competed in the very first Safari Classic in 2003 where he made news when his Escort Mk1 caught fire while chasing for the lead on the last day.

Jorge Perez Companc from Argentina together with his co-driver, José María Volta, have already had their Viking Escort Mk2 out on the Classic Rally South Africa where they took second place overall. Both they and Jan Hagman from Sweden will be competing with Viking Escorts on the Rallye du Maroc Historique to gain more knowledge about the developments that Viking have devised for these cars. Mills says that “Lots of development work been done since the last Safari Classic using events such as Morocco, Senegal and South Africa as test events for new parts. The car is very good now and we are happy with all the work done to date.” The fourth Viking-entered car next November will be driven by Aziz Tejpar who has also competed on several Safari Classics in the last few years and follows in his father’s footsteps as Aziz Tejpar Senior drove the old Safari Rally many times.
John Lloyd’s co-driver for the Safari Classic is Adrian Cavenagh, one of two rallying Cavenaghs from Kenya. The other one is elder brother Adrian who has recently acquired a Francis Tuthill prepared Porsche 911 and, over the Easter weekend, he gave it an airing on the KCB Safari Rally. This event caters mainly for modern rally cars like Mitsubishis, Subarus, Ford Fiestas and Protons but it also has a class for classic rally cars. Much to his surprise and pleasure, Alistair won the classic category and finished eleventh overall. He says that the Porsche requires a “different driving style and commands a lot of respect when slippery. One high speed spin in a forest cost us seventh overall but we were lucky to get away with it !”
Back in Europe, seven times German Rally Champion, Matthais Kahle has just confirmed that the car that he and Thomas Schünemann will drive on the Safari Classic will be a Datsun 260Z previously campaigned on the rally by Malcolm Destro. Kahle drove for Skoda when he was accumulating his championship titles but since then, he and Schünemann have been competing on the Dakar under the name of the HS Rallye Team. The “HS” stands for “Hamburger Software GmbH & Co. KG” which is Schünemann’s company. Together they have competed on the Dakar seven times mainly in buggies and have won the 2WD buggy class twice while in 2011 they finished tenth overall. In all, during the period 2006 to 2013, they competed in seventeen rally-raids and won their class seven times. The Safari Classic will be a new event for them but they will bring plenty of experience to their effort and will have their first taste of East African motoring when they drive the Datsun on a Kenyan rally next month.
With eligible cars for the Safari Classic restricted to those manufactured before the end of 1978, the entire entry comprises cars with two-wheel drive. And of those, only a tiny proportion of them are front-wheel drive. It just so happens that for the 2015 edition of the Safari Classic, the only driver to have won an African WRC round in a front wheel drive car is on the entry list. This is Kenneth Eriksson who in 1986 won the Group A championship forming part of the WRC (at that time dominated by Group B cars) driving a VW Motorsport Golf GTi and the following year, 1987, he won the Ivory Coast Rally outright.
Eriksson is not driving a VW Golf on the Safari Classic – his mount will be a Datsun 260Z entered by Autosport Kotek – but there will be a VW Golf on the rally prepared by Schmack Motorsport in Germany. The idea to enter a Golf came from long time Safari enthusiast and participant, Jürgen Bertl, whose first experiences of East African rallying came when he was a prominent member of the Audi Sport rally team in the 1980s : “”It’s the perfect car for the Safari. It is light, reliable and without any complex technologies – and it is cheap as well. Of course it is not a contender for overall victory but it is certainly good enough to win the 1.6-litre class and I am sure that it will be able to surprise some of the bigger cars.” Schmack have yet to nominate a crew for the Golf while Bertl himself is organising a team to run a Porsche 911 for Bernhard and Ronny Kessel.