Lewis Hamilton says taking his 100th career pole position in Formula 1 is “crazy”, after he beat Max Verstappen to the top spot in Barcelona on Saturday. 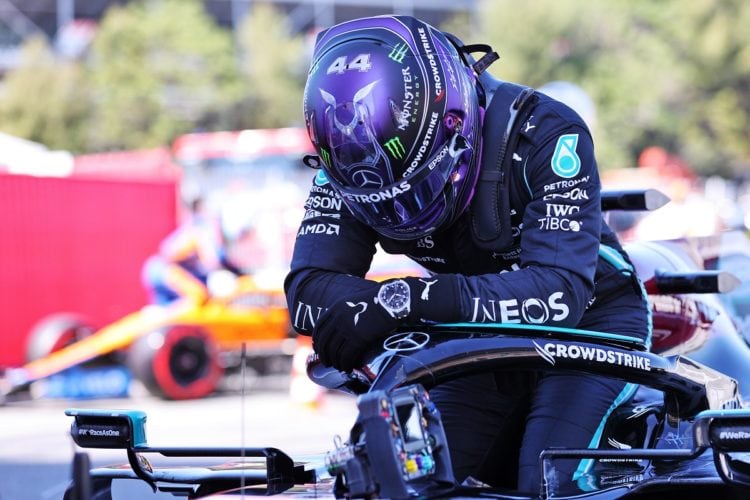 The Briton has held the all-time pole position record since 2017, edging Michael Schumacher’s record at the Italian Grand Prix that year.

“I don’t really feel like I can compute it right now, it’s a huge number,” Hamilton said of his 100th pole.

“I don’t know how I’m supposed to feel. But I’m excited that it was so close and it felt amazing.

“Qualifying is so special when you come across that line and you find out that you are just ahead, and you think ‘okay, how am I going to squeeze out more, will the other guys find a tenth or two or three on the next run, or not at all?’

“It’s nerve-wrecking. It’s such a big number that it’s hard to express just how amazing and crazy it is. I don’t really know what else to say.”

The 36-year-old credited Mercedes with allowing him to streak to triple-figure pole positions, believing the two parties have been on a “remarkable journey” since 2013.

“I’ve been racing a long time and the 100-mark is something that I don’t think anybody, and particularly me, thought that I would get to that number,” Hamilton said.

“But when I think about it, I just think about all the people that have helped me get there. It’s not only the amazing team that I have here but it’s the incredible group of people back at the factories, who just never cease to amaze me and continue to raise the bar.

“There’s so many people we don’t get to see each other all the time but we’re connected in these great debriefs that we have. But this journey that we’ve been on all these years, it’s been remarkable and so enjoyable.”

The usual leading three suspects fought it out for pole position at the Circuit de Barcelona-Catalunya and the quickest efforts came through the first Q3 runs.

Hamilton’s benchmark of 1:16.741s left him just 0.036s clear of title rival Max Verstappen but it was sufficient as neither improved during the final push efforts.

Valtteri Bottas was third, just over a tenth down on his team-mate, as the leading trio finished comfortably clear of the rest.

The Briton is the first driver in Formula 1 history to reach a century of pole positions and he is now 32 clear of Michael Schumacher in the all-time list.

The lap also continued Mercedes’ dominance at the Circuit de Barcelona-Catalunya, despite the small margin, with the squad having taken pole position at the venue across each of the last nine seasons.

The front three had a margin of six-tenths over the chasing pack and that group was led by Ferrari’s Charles Leclerc.

Alpine’s Esteban Ocon performed strongly to take fifth spot while Carlos Sainz was the quicker of the home representatives in sixth position, as Fernando Alonso finished at the foot of the top 10.

McLaren had a relatively subdued display by the standards of its improved 2021 pace, with Daniel Ricciardo taking seventh, and Lando Norris.

Sergio Perez had a troubled session in Red Bull as he struggled to get anywhere near Verstappen.

Perez spun through Turn 13 on his first Q3 push lap and wound up only eighth at the conclusion of the session.

Aston Martin’s lacklustre start to 2021 continued as neither Lance Stroll nor Sebastian Vettel made it through to Q3.

The team, which had qualified fourth and fifth at Barcelona last August, was left with Stroll in 11th place and Vettel down in 13th.

They were split by Pierre Gasly, whose string of Q3 appearances came to an end.

Antonio Giovinazzi and George Russell did well to beat their respective team-mates and make Q2 but were never realistic contenders to make the top 10.

Giovinazzi was 14th with Russell some way off in Q2, compared to his Q1 effort, as he finished 15th.

Yuki Tsunoda starred on his debut in Bahrain but since then his fortunes have somewhat dipped.

The Japanese youngster’s difficult run continued as he fell on the wrong side of the Q1 cut-off and was left down in 16th position.

Kimi Raikkonen had been inside the top 10 during final practice but that form dissolved in qualifying as the 2007 World Champion took only 17th.

Mick Schumacher built on his and Haas’ encouraging display in Portugal as the rookie took 18th, out-qualifying Williams’ Nicholas Latifi, who broke a mirror when he ran heavily over the Turn 9 exit kerbs.

Nikita Mazepin brought up the rear once more, seven-tenths behind his Haas team-mate.