The 2019 running of the Le Mans 24 Hours certainly wasn’t without action. After a rather lackluster race last year, at the start of the ‘Super Season’, the ‘Super Finale’ delivered, in every class, with drama, right until the finish.In the end, it was Toyota Gazoo Racing that won overall, after another dominant performance against the privateer LMP1 pack. That wasn’t a surprise, but the final hour of the race served up a huge bout of confusion, as a faulty sensor for the No. 7 caused the lead to change between the two TS050 HYBRIDs, leaving 252,000 fans in the stands and members of the team, scratching their heads through the final stint.

The No. 8 eventually took the victory, after a final hour filled with confused radio messages between Kazuki Nakajima in the winning car and Jose Maria Lopez in the No. 7 and their engineers.

It was heartbreaking for the Mike Conway, Kamui Kobayashi and Lopez No. 7 team, who led most of the second half of the race but came up short, all three forced to wait at least another year to score their first win. It was a cruel end after the car had the pace to win this race all the way to the flag.

With time winding down, the final sequence was explained clearly, a team spokesperson telling RACER that the No. 7 the tire sensor indicated that there was a right-front puncture just before the end of the penultimate hour. This forced the team to pit the car. When it pitted, the team changed only the right-front tire. The sensor was then discovered to have been wrong. So they pitted the No. 7 once again, to change the right rear.

“This is not what the No. 7 has deserved. We thought there was a front right puncture; now there was one on the rear. We should have changed all the tires. We have a race now. This was not in our script. Sorry,” team manager Rob Leupen said.

After that, the team managed the finish — there wouldn’t be a swap. It made for a really subdued finish, with little celebrating in the Toyota pit.

The victory means that Fernando Alonso, Nakajima and Buemi have won two Le Mans 24 Hours overall in a row and the FIA WEC World Drivers’ Championship. Toyota too has a pair of Le Mans victories now.

“The main goal this weekend was to win the championship, obviously the race was not playing to us — car No. 7 was quicker than us for 24 hours,” Alonso told Eurosport/MotorTrend TV. “They really deserved the victory, but today the luck decided that we had the better trophy. Luck sometimes plays an important part in motorsport; today we feel extremely lucky and maybe we don’t deserve it, but we take it. The world championship feels great.”

Behind Toyota, there was plenty of excitement. Finally, after almost an entire season, four of the privateer LMP1s went toe-to-toe for the final podium spot. The pendulum swung between the SMP Racing BR1s and Rebellion Racing R-13s multiple times in the end. On Sunday afternoon, though, it would be SMP that would take the ‘best of the rest’ moniker with the No. 11 BR1 of Vitaly Petrov, Mikhail Aleshin and Stoffel Vandoorne. The trio drove masterfully en route to scoring the best result for the chassis to date and AER’s first ever Le Mans overall podium.

In the end it wasn’t close between the two teams, as the No. 3 Rebellion was knocked out of contention in the second half of the race after a wild sequence of events. The list of mishaps included a three-minute penalty for supplying officials with the wrong tire serial numbers, a spin into the gravel on the Porsche Curves by Gustavo Menezes and a series of brake issues. All this after the car had to be repaired hastily in the opening hours of the race after Thomas Laurent went nose-first into the barriers down the Mulsanne Straight. 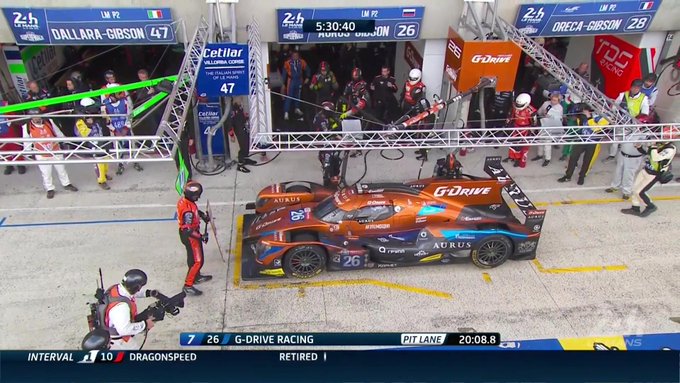 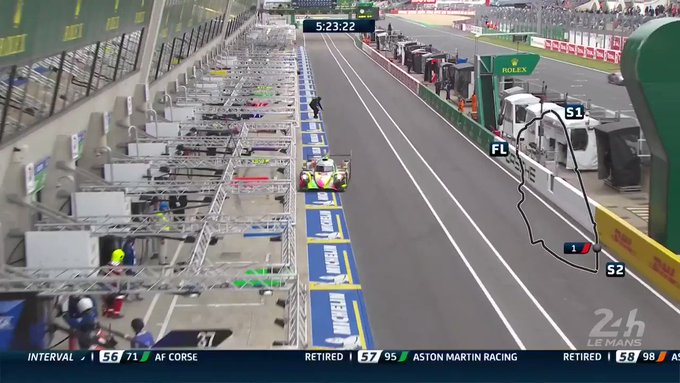 It was a rollercoaster for the Swiss team, and it would go mostly unrewarded, though both its cars finished. The No. 1 of Neel Jani, Bruno Senna and Andre Lotterer finished fourth, three laps behind the No. 11, after the car hit trouble early when the team incorrectly misidentified a puncture, and didn’t recover. The No. 3, meanwhile, crossed the line 15 laps behind the winning Toyota.

Elsewhere, ByKolles and DragonSpeed didn’t feature at all. It was a miserable outing for both teams, the ByKolles CLM suffering an engine failure, and the DragonSpeed BR1 suffering a multitude of issues before retiring. Elton Julian’s LMP2 car looked to make up for the disappointment of its LMP1 effort, but that retired after an incident while in the running for a podium, marking a disappointing end for the team’s WEC program.

The sister SMP Racing BR1 also didn’t feature in the battle for third in the end after Egor Orudzhev crashed heavily at the Porsche Curves during the night, leaving the Russian team with only one car to fight for a podium spot. 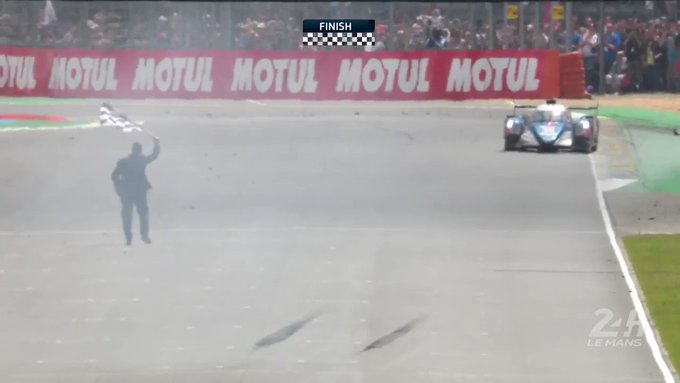 Unlike LMP1, LMP2 featured real jubilation at the end. Signatech Alpine won the class again, athough this time, after being handed the win later in the year in 2018, its drivers were able to celebrate on the podium. Andre Negrao, Nicolas Lapierre and Pierre Thiriet finished up an astonishing 2018/19 campaign with a pair of Le Mans wins and a world title.

It wasn’t a dominant run as such for the French outfit, but toward the end the pressure from behind fizzled out. With so many other dramas occurring up and down the order it was still imperative that the team stayed perfect, as its title rivals in the No. 38 Jackie Chan DC Racing ORECA finished second and was right there ready to pounce for almost the entire race.

“We are world champions, we’ve won Le Mans — it’s amazing. A second time in a row. I can’t expect better than that!” said Negrao.

Alpine’s win also marked the end of a winning streak for Dunlop in LMP2, the French tire brand preventing nine straight wins for their rival brand. It was in every sense, a tire war here. Michelin’s tires had the outright pace, but were not as durable as Dunlop’s. This made for an intriguing fight, Jackie Chan DC Racing’s lead car steering Dunlop to a second-place finish on this occasion.

The No. 38 ORECA of Ho Pin Tung, Stephane Richelmi and Gabriel Aubry that crossed the line second in the race, did so in the title race too. A puncture late in the race played a big part in denying them a chance at the win and in the end, they were a full lap behind.

Completing the podium was the TDS Racing ORECA of Loic Duval, Francois Perrodo and Matthieu Vaxivier, the French trio claiming silverware after a topsy-turvy race. They started from pole, dropped back down the order, and gradually clawed their way into a top three spot, benefiting from the misfortune of other teams.

Off the podium was the No. 22 United Autosports Ligier, the best of the other LMP2 chassis. The No. 22 was delayed at various points, with a penalty and a door replacement, but Paul Di Resta, Phil Hanson and Filipe Abuqeruque stuck at it and scored another strong finish.

There were plenty of contenders in the class, and two key runners hit trouble. the No. 37 JCDC ORECA suffered a terminal gearbox issue from a top five spot, and the G-Drive Racing ORECA took a commanding lead before a gearbox issue forced Roman Rusinov in for an extended stop during the 19th hour. In the end the team finished sixth, a hugely disappointing result after the double-act of Jean Eric Verge and rookie Job Van Uitert proved to be the class of the field for much of the race.