Many people said they weren’t surprised by Marc Márquez’s seventh-place finish at Portimao. But after the 25-lap race the six-times MotoGP champion certainly didn’t look like someone who thought he had everything under control.] 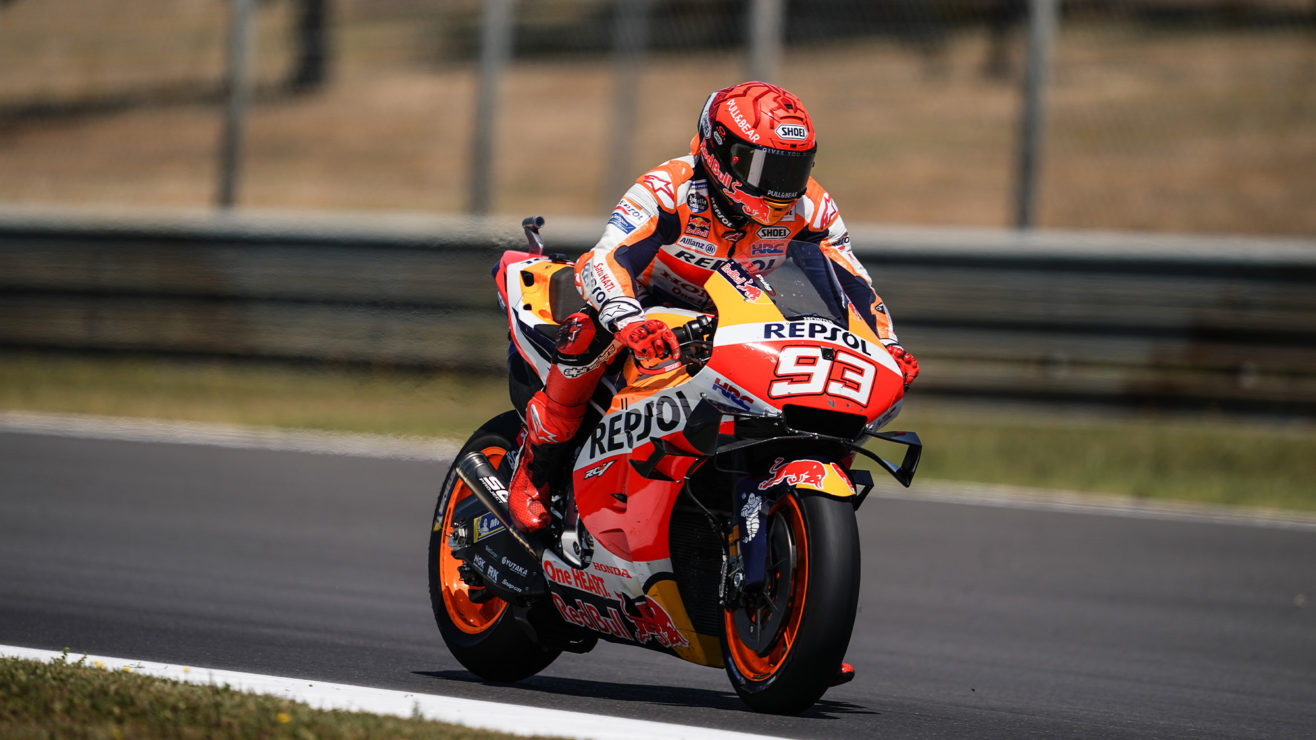 The relief of seeing a chequered flag for the first time since November 2019 proved too much, so when he returned to his Repsol Honda garage the world saw a Marc Márquez it had never seen before: sobbing with happiness at the realisation that his career wasn’t over.

“I’m a person who likes to keep the emotions inside but when I arrived back in my box with all my mechanics I just exploded with my emotions,” he said. “It’s been a very long time since I dreamed on finishing a MotoGP race again. It was an explosion of emotions that I couldn’t control but it was very nice.

All this proved to those watching that Márquez isn’t the bombproof operator they may have thought he was. But the man himself had already found that out.

Márquez may be the master of treacherous mixed conditions. But after a nine-month break?

Even if a couple of years ago he may have thought he might be superhuman he certainly doesn’t now, because over the past nine months he has frequently glimpsed a future that doesn’t include the thing that makes him happiest: riding a MotoGP bike at full gas, dancing along the precipice, playing that game of risk and reward better than anyone else has played it in the history of motorcycle racing.

Certainly Márquez’s comeback isn’t the greatest in MotoGP history but it may become so.

The last MotoGP king to go through these horrors was Mick Doohan who, in 1992, shattered his right leg at Assen. At that time the Aussie was ruling 500cc GP racing the way Márquez ruled MotoGP until he broke his right arm at Jerez last July.

Doohan’s story is infamous: a botched operation by local surgeons, kidnapped from hospital by race medic Dr Claudio Costa, who sewed the Aussie’s legs together to save the rotting right leg from amputation.

Just eight weeks later he was in Sao Paulo, Brazil, desperate to prevent title-rival Wayne Rainey from taking the points lead. Doohan was a mess: grey, withered, barely able to walk and unable to keep his right foot on the footpeg because the badly infected lower leg was so numb.

In the middle of the night before the race the infected leg exploded, leaking pus and fluid everywhere. Costa, sleeping in a nearby room, rushed to help. He flushed litres and litres of saline fluid through the gaping hole in the rotting flesh. Then Doohan tried to get back to sleep, without much success. He raced and finished just outside of the points. Two weeks later the title went to Rainey, who from the following year had his own horrors to face.

Doohan underwent multiple surgeries on his mangled leg, including an operation to fix a mal-union. Márquez has so far undergone three surgeries on his right humerus, including a bone graft to fix a non-union. His time in and out of hospital may not have been as gruesome as Doohan’s, but like Doohan he knew it might be game over.

Márquez’s first exit from the pits on Friday morning was probably the most anticipated practice run in MotoGP history. All he wanted was a straightforward session on warm, dry asphalt, to ease himself back into the swing of things. What he got was a track drying after overnight rain.

To maintain that mental and muscle memory after so long is simply astonishing.

Márquez may be the master of treacherous mixed conditions – when he has the bravery and the talent to push harder than anyone to work heat into the front tyre. But after a nine-month break? He did it anyway, not quite like he’s done it at Sachsenring, Brno and elsewhere, but he rode harder than pretty much everyone else in the conditions to finish the session third fastest, two-tenths of a second behind Maveick Viñales.

The know-alls weren’t surprised. They knew he’d do it. He’s an alien, isn’t he?

But calling any rider an alien or a superhuman is a huge disservice. It suggests that they are imbued with special powers that make them superior to mere mortals. But of course they are mere mortals. They’re just braver, cleverer, more determined and, most of all, more prepared to sacrifice everything they have to achieve their goals. That’s what makes them special.

If FP1 was some kind of a fairytale, the rest of the weekend was anything but. MotoGP weekends get more and more and complicated with each session, even if you’re fully fit.

During the first two sessions Márquez was already making shapes – the front tucking, the rear kicking around – which boggled the mind. To maintain that mental and muscle memory after so long is simply astonishing.

Riding a motorcycle on the limit is a bit like speaking a foreign language. If you can speak the lingo you can have a conversation with someone. They say something, you understand what they’ve said and you reply in a way they understand. 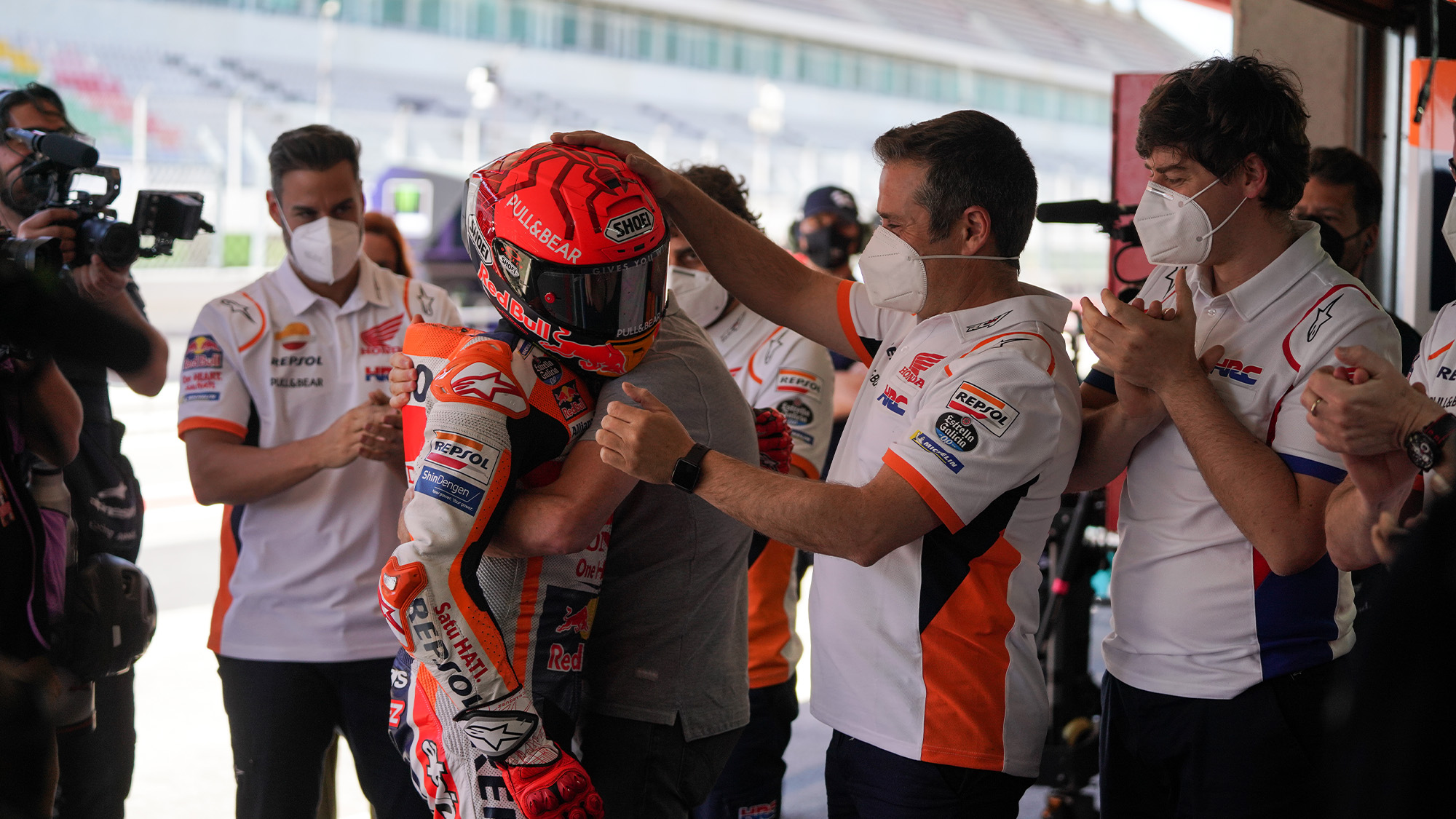 When the motorcycle does something, like tuck the front, it speaks to you. It tells you many things, which you need to understand in a millisecond and then make your reply, in a way the motorcycle can understand and react to. If you misunderstood what the motorcycle told you or you replied incorrectly then you’ll probably crash. You had a misunderstanding.

But if you go away and don’t speak that language for many months then you lose your fluency and when you next converse in that lingo you may struggle to make yourself understood.

That’s why Márquez’s immediate return to fluency with his Honda RC213V was so impressive. Straight away they were chatting away like friends who haven’t seen each other in months. Even so, there were misunderstandings.

Most spectacularly they had a bit of a shouting match as they attacked Turn Seven on Friday afternoon, the bike’s rear end coming right around during his final lap of the day – a time attack on new soft tyres.

“With new tyres I struggle more, because with new tyres everything is stiffer, while with used tyres everything is softer,” he explained. “During the change of direction from Turn Six to Turn Seven my head said, ‘Now it’s time to go into the corner’ but my body didn’t follow what I wanted to do, so I created the slide to make the turn. I still don’t understand how I ride the bike; I don’t really feel it.”

But none of that really mattered because Márquez had rediscovered his nirvana. “Difficult to find a single word to describe the first training sessions, but I felt a lot of happiness!” he said.

“I wasn’t in my place, like when you’re a kid and you play soccer with the older kids”

He ended the day sixth fastest, ahead of world championship leader Johann Zarco and five-hundredths of a second behind reigning champ Joan Mir. To most onlookers this seemed like Lazarus rising from the dead, but not to Márquez.

“When I saw I was P6 it was a great surprise because on that lap I made many mistakes, the feeling wasn’t good and I felt slow,” he said.

Saturday was more difficult. His doctors had already told him that the muscles in his right arm would get weaker with every lap, so he was outside the top ten in FP3, so he had to go through Q1 to make it into Q2, so he could fight for a decent grid position. Of course, when it was do or die in Q2 he did it, ending up on the second row.

Now, after his first three hours on a MotoGP bike in nine months, things were starting to come into focus, so he was considering his position on the bike, the settings and his possibilities.

Remember that Márquez’s use of his elbows as outriggers is absolutely essential to what he does.

On Saturday evening he told some journalists that he wasn’t sure if the arm would last till the end of the race. And it nearly didn’t.

The first laps were overwhelming, because finding yourself in the midst of a MotoGP race after nine months away is probably a bit like finding yourself back in the trenches on the Western Front after a weekend’s leave in Paris

“The hardest thing was the first laps, because I wasn’t in my place, like when you’re a kid and you play soccer with the older kids,” he said. “I didn’t have the pace and I didn’t have control of the bike, so everybody overtook me. Then I was calm and I didn’t fight. I just found my pace and then my race started. During the last seven laps I wasn’t able to touch the elbow, then suddenly my body said ‘enough’ and for the last five or six laps I was just sitting on the bike, trying to finish the race.”

Márquez asked a huge amount from his injured right arm during the Portimao weekend and he will now rest it until the next race at Jerez on May 2.

“We already spoke with my doctors before the race. Coming back to racing means my training must be less, so for the moment I won’t ride any bikes. I’ll just train in the gym, three or four days maximum, without big weights. The bone is okay, but the stress we put on the bone must be progressive, so it can’t be every day of every week, so of course it will take more time to come back to really good physical condition.”

Three rounds gone, 17 remaining. It’s up to you if you want to start doing the calculations…

And make no mistake, if the new Márquez turns out to be anything like the old Márquez then this will be the greatest comeback of all time and there will be little doubt about who is the greatest rider of all time.