Mercedes-Benz took the wraps off the all-new EQC electric SUV in Stockholm , launching the first salvo at Tesla and the quickly approaching competition from its German rivals. Slated to go on sale in the U.S. in 2020, the GLC-size crossover is powered by an 80-kWh battery, giving it a range of about 279 miles (in the notoriously optimistic New European Driving Cycle) on a full charge and a combined output of 402 hp and 564 lb-ft of torque courtesy of two electric motors located on both axles offering different outputs — good enough for 4.9-second sprints from 0-60 mph. 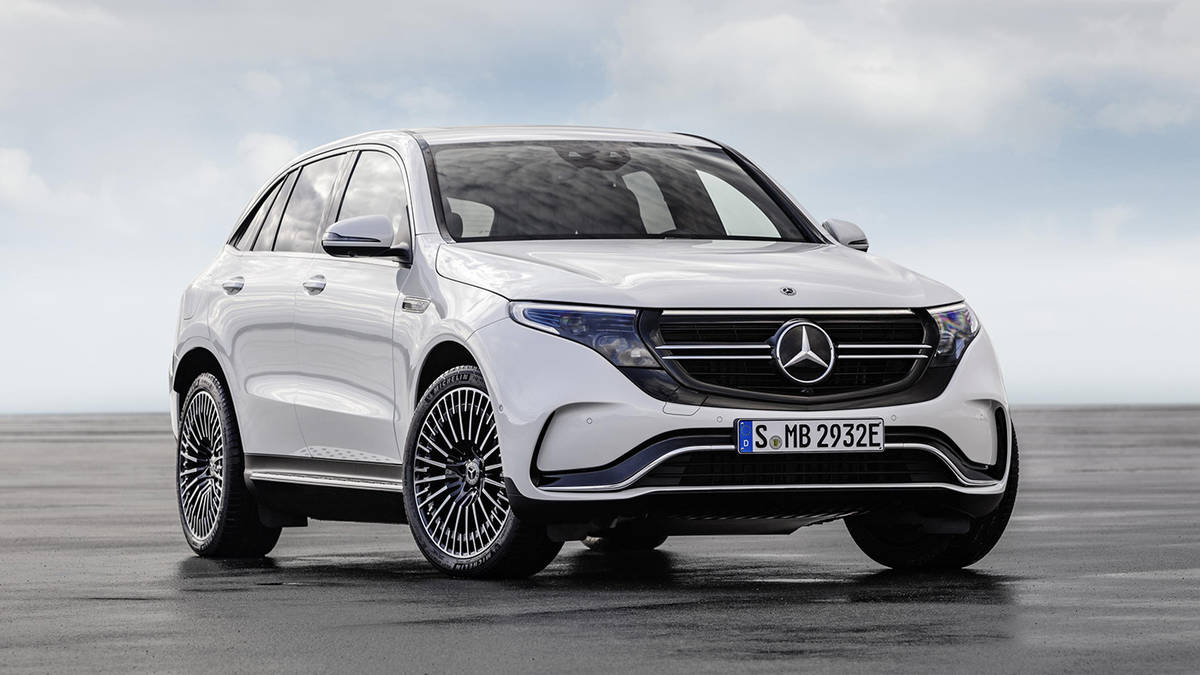 Mercedes promised an official U.S. range a little later, closer to the market debut of the EQC 400, which is not unusual given the market-specific certification, but it will likely be a bit south of the 279-mile NEDC figure. The rollout of the EQC this week, therefore, represented an early production look at the first mass-market electric Mercedes, in a segment that will soon see plenty of competition from up and down the autobahn.

Just like the competition, the EQC will offer several different driving modes based on the energy needs of the moment, including eco and max range. A smart coasting function dubbed eco assist will use speed limit data, sign recognition and mapping technology to seek out places where the EQC will be able to coast to save energy. The front motor is geared toward range economy, while the rear motor optimizes performance; the EQC is designed to rely on the front motor for normal cruising, shifting power continuously in real time based on the terrain, load, and needs of the moment.

The interior features a familiar if more futuristic look, along with a wide-screen instrument panel and infotainment screen.

A production-looking and wildly camouflaged Audi e-tron SUV made its debut at the Geneva auto show this week. Audi wrapped its SUV not to hide it, but rather to show it off. Hence the orange accents …

“The power consumption and range of electric vehicles depends very much on the driving style,” Mercedes says. “The EQC supports its driver with five driving programs through dynamic select, each with different characteristics: comfort, eco, max range, sport and individual for an individually customizable program. In the more economical driving modes, the haptic accelerator pedal that prompts the driver to conserve power plays an important role. The driver is also able to influence the recuperation level using paddles behind the steering wheel.”

Speaking of energy, the 80-kWh battery places the EQC a little south of the competition, which will include the Jaguar i-Pace with its 90-kWh battery and Audi e-tron with its 95-kWh battery. But it’s a little too early to compare the power and ranges of these three vehicles, for obvious reasons.

Sporting familiar styling and dimensions, the EQC 400 is meant to be instantly recognizable as a Mercedes and instantly recognizable as a GLC-size model, which has been a resounding hit for the automaker, making it less a surprise that the first battery-electric Mercedes is neither a large sedan nor a sleek, droplet-shaped hatchback. As such, luxury and space are in similar supply to the GLC-Class, making it easy for those shopping for a gas or diesel-engined crossover or SUV with these features and dimensions to choose an electric vehicle instead.

“Electric now has a Mercedes — with the EQC, we are putting the first Mercedes‑Benz of our new product and technology brand EQ onto the roads,” said Britta Seeger, member of the Board of Management of Daimler AG. “EQ stands for ‘Electric Intelligence’ and represents Mercedes-Benz in its most progressive way. We are systematically using human-centered innovation by incorporating intelligent services and networked charging solutions for our customers from the very start.”

Mercedes is promising a range of 279 miles in the European cycle, though the U.S. range won’t be announced for a while. Either way, it will be above 200 miles, which may or may not be enough for some to make the switch to electric cars.

On the inside, the new electric SUV is still familiar if a touch more futuristic: A wide instrument cluster and infotainment screen sits on the dash like an open book, while glowing buttons and blue mood lighting, mixed with piano-black surfaces and rose gold accents, complete the interior look. Those accustomed to the minimalist interiors of the Tesla Model X, with a single touchscreen occupying the center stack amid an otherwise minimalist interior, will be pleasantly surprised by the sheer variety of colors and finishes in the cabin of the EQC but it’s not meant to be baroque or distracting — the overall look has something in common with the controls and colors of the J.J. Abrams-era U.S.S Enterprise, especially due to electric blue colors.

“In the increasing broad portfolio of Mercedes-Benz, the EQ brand provides easy and transparent guidance for customers interested in electric drive. For the brand as a whole, EQ is a further, logical step within the Mercedes-Benz strategy of “Best Customer Experience,” the automaker said. “All in all, more than 10 billion euros will be invested in expansion of the electric fleet in the next few years, and an additional billion in battery production. At the same time, we are also investing in the systematic expansion of the charging infrastructure.”

When the EQC 400 goes on sale it’ll do so in a rapidly expanding segment — BMW’s iX3 will be on sale at that point, in addition to the Audi e-tron and Jaguar i-Pace — giving the EV and SUV-buying public far more choice than exists on store shelves at the moment. Suddenly, luxury EV buyers will be spoiled for choice. Let’s hope the demand (and the charger network) are there to keep all of these electric luxury SUVs moving out of dealer lots.