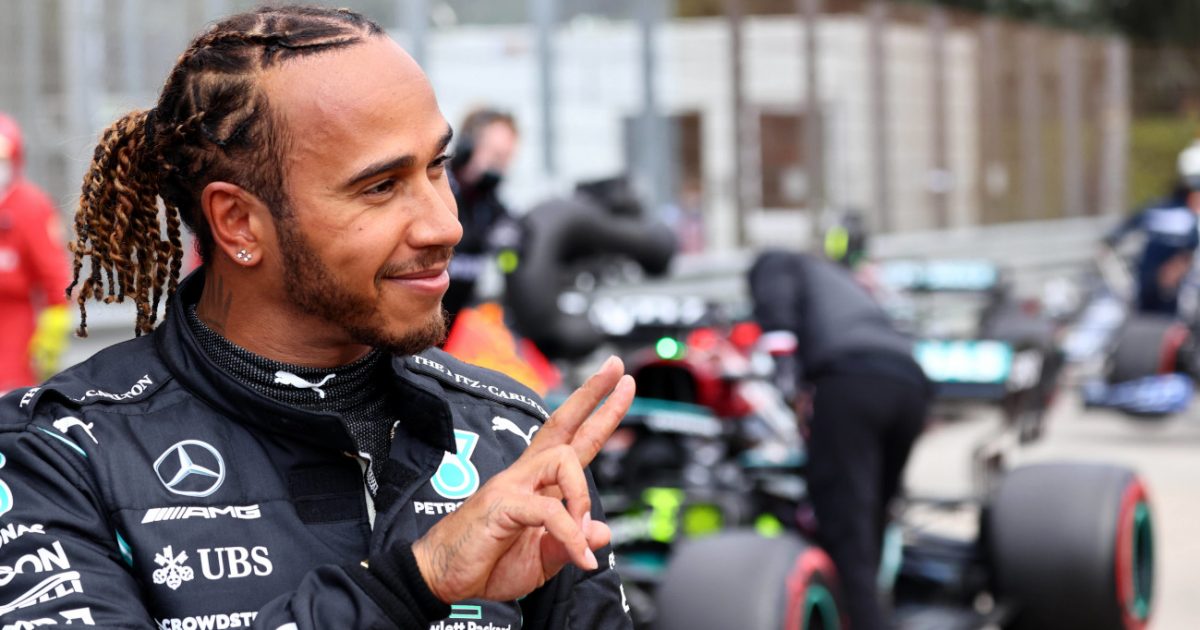 The Brit was made to work for win number 97, losing P2 to Verstappen after a Safety Car restart before retaking the position with a sweeping pass through Turn 1.

The corner that saw the most action on Sunday, Hamilton also used Turn 1 and its DRS to take the lead off Bottas and never looked back. He claimed the win with Verstappen second and Bottas third.

It was as you were for the top three at the start with pole sitter Bottas leading off the line. Verstappen tried to get him to pull him along only for Hamilton to slot into the gap, preventing an attack from the Red Bull for second. Sergio Perez didn’t have a good start, losing a position to Carlos Sainz with the flying Lando Norris up from seventh to sixth as he stormed past Esteban Ocon. Charles Leclerc, Pierre Gasly and Sebastian Vettel made up the top ten at the end of the opening lap.

It wasn’t long before the Safety Car was in control of the race, Kimi Raikkonen out with his front wing lodged under his front wheels. He drove into the back of Antonio Giovinazzi, clipping his left rear tyre and broke his own wing. The drivers were led through the pits as the marshals cleared the debris on the main straight.

Preparing for the restart on lap 7, Hamilton and Verstappen were almost alongside before Bottas pulled away with Verstappen making the pass on Hamilton for second. Perez was another Red Bull on the move, up to fourth but only briefly as Norris took that off him. Sainz falling from fourth to sixth.

Five laps later Hamilton got his revenge, using DRS to drag his Mercedes up to the Red Bull and sweep by at Turn 1. The reigning World Champion immediately pulling away by the necessary second to break the DRS, chasing down Bottas. “I’m just a sitting duck on the straights, unbelievable,” complained Verstappen.

There was action on and off the track with Perez questioning the way in which Norris overtook him earlier in the race. According to the Mexican driver, the McLaren made the move with all four wheels off the track. Shortly after Norris let Perez through and up into fourth. Daniel Ricciardo bumped Vettel out of the points, passing the Aston Martin for P10 on lap 18 – yet another DRS pass at Turn 1.

The start of lap 20 saw a change for the lead as Hamilton, with DRS at his disposal, swept around the outside in a hail of sparks to lead the Portuguese Grand Prix. Bottas down to second and Verstappen right there waiting to pounce. Hamilton told Mercedes his tyres were “shot” only to put in fastest lap after fastest lap.

Sainz, who started on the soft tyres, kicked off the pit stops, coming in on lap 22. That saw a spate of soft tyre stoppers, shuffling the order, before some of the medium runners also came in. The top six on lap 27 – Hamilton, Bottas, Verstappen, Perez, Ricciardo, Fernando Alonso – continued on their mediums. Bottas was told he’d be the first of the Mercedes drivers to pit, the team having a set of softs for both drivers. Perez was told he’d be running long, Red Bull only having new hard tyres available.

Red Bull was the first to blink, stopping Verstappen for fresh hard tyres on lap 36. Bottas was told to “pick up the pace”. He came in a lap later, also opting for hard tyres, returning to the track ahead of the Dutchman – the gap minimal with Verstappen making the pass at Turn 5 after Bottas lit up his rears and made a slight wobble. Hamilton was in on the next lap, lap 38. He was comfortably ahead after his stop, six seconds up.

Perez, the only driver still to stop, was leading with 20 to go but Hamilton was catching by almost a second a lap. Nikita Mazepin didn’t help the Mexican’s cause with Perez calling him a “f***ing idiot” as he not only held him up but forced the Red Bull to brake to avoid contact. The stewards penalised the Haas driver five seconds.

Hamilton took the lead off Perez on lap 51, the Red Bull still not stopping, while Bottas in turn was catching Verstappen, “hunt him down Valtteri you’re the quickest car” said Wolff. Perez finally stopped a lap later, coming out P4 and 23s down on Bottas. Bottas’ charge ended on lap 55 when he reported that he was “losing power” and immediately four seconds to Verstappen. It was an “exhaust temperature sensor” with Mercedes quickly sorting the issue and Bottas was back up to speed.

Hamilton raced to the win, his 97th, to take a seven-point lead in the Drivers’ Championship over second-placed Verstappen. The Red Bull driver joined Bottas in making a late pit stop to try grab the fastest lap point. Verstappen won that battle and finished P2 on the day with Bottas completing the podium. Perez was P4.

Norris had yet another good Sunday, best of the rest in fifth place, ahead of Leclerc, Ocon and Alonso. Ricciardo raced from P16 on the grid into the points with Gasly P10.