Bruno Senna, Gustavo Menezes and Norman Nato have won the Lone Star Le Mans race at Circuit of the Americas for Rebellion Racing.

The trio put in a dominant performance on board the #1 Rebellion R13-Gibson to defeat the pair of Toyotas and take their second victory of the season. Senna started the car from pole position, retained the lead on the opening lap and the trio maintained their lead in a race that stayed green throughout all of the six hours. 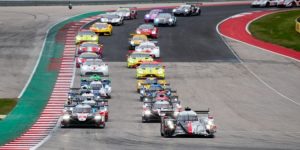 Paul di Resta, Filipe Albuquerque and Phil Hanson took their second consecutive victory in LMP2 for United Autosports. The trio was running on a different strategy with the #22 ORECA 07-Gibson after Di Resta had to cut his opening stint short due to rear grip issues.

Racing Team Nederland missed out on a podium despite a valiant effort that saw the #29 ORECA 07-Gibson of Giedo van der Garde, Frits van Eerd and Nyck de Vries fight its way from the back of the LMP2 pack to the front and even lead on several occasions, but the stints by bronze-rated Van Eerd arguably cost the team a chance at victory.

They had to settle for fifth in the final minutes when De Vries, on worn Michelin tyres, was left helpless against a charging Lapierre.

Signatech Alpine Elf recovered to finish sixth despite a spectacular brake failure in the early stages of the race for Pierre Ragues, but Ragues, Andre Negrao and Thomas Laurent went on to bring the #36 Alpine A470-Gibson home in sixth.

Nicki Thiim and Marco Sorensen took a dominant, lights-to-flag victory in GTE Pro with the #95 Aston Martin Vantage AMR. They started from pole and did not relinquish the lead throughout the race.

Michael Christensen and Kevin Estre finished second in the #92 Porsche 911 RSR-19, while James Calado won a late scrap with Alex Lynn to bring the #51 Ferrari 488 GTE Evo home in third for himself and Alessandro Pier Guidi, while Lynn and Maxime Martin had to settle for fourth. Fifth went to Davide Rigon and Miguel Molina in the #71 Ferrari 488 GTE Evo.

Egidio Perfetti, Matteo Cairoli and Laurents Hörr led the class for a significant part of the race, but were eventually chased down by the two Aston Martins. In the end, the #56 Team Project Porsche 911 RSR had to settle for third. Nicklas Nielsen, Emmanuel Collard and Francois Perrodo took fourth in the #83 AF Corse Ferrari 488 GTE Evo.