This 1967 Ford GT40 MkIV still racks up thousands of miles around the NYC area.

Ford v Ferrari featured plenty of real cars racing around real tracks. But if you thought that the rest of the time all of the Ford cars that raced in the 24 Hours Le Mans in the late 1960s were all locked away in vaults not unlike Fort Knox, as seen in Goldfinger, you may be in for a surprise. 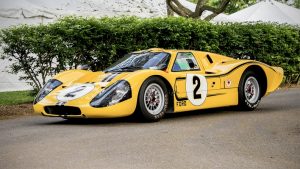 One particular Ford GT40 that raced in at the 24 Hours of Le Mans has been racking up tens of thousands of miles in the care of its current owner in the New York City area, for jaunts around the city and the entire northeast corridor.

That’s right: There’s a Le Mans GT40 that is no stranger to the less than perfect roads of New York State and New England.

Who is brave enough to subject a GT40 with such a history to roads that have only been sporadically maintained since 1967?

James Glickenhaus, of course, famous for automotive endeavors that are otherwise only undertaken by automakers or their racing teams—and a perennial candidate for The Most Interesting Man in the World.

And the story behind this 1967 Ford GT40 Mk IV is just as interesting.

Glickenhaus originally bought the GT40 you see above in 1991 when the car was billed as the first-place finisher at the 24 Hours of Le Mans in 1967, driven to victory by A.J. Foyt and Dan Gurney. All seemed to be in order—the car was painted in period by Ford and its provenance seemed beyond doubt—so there was no reason to suspect that something could be a little off.

Glickenhaus has been driving this GT40 around the northeast since purchasing it in 1991.

After Glickenhaus bought the car, he began doing research using period photos of the cars in the 1967 race; he also examined other GT40s in the care of other owners as well as the Henry Ford Museum. And he noticed that his car lacked a cracked piece of bodywork after pit crew members were known to have climbed on what was the race-winning car.

But another car owned by the Henry Ford Museum, also painted red, featured bodywork damage in its nose where the race-winning car was known to have incurred it. That car also had a “Gurney bubble” in its roof and door and a very low seating position, as if it had been tailor-made to accommodate Gurney’s 6-foot-4-inch height.

Glickenhaus also noticed his car had aluminum repairs that were known to have been made to a car raced by Bruce McLaren and Mark Donohue in the race, car No. 2 painted yellow, when a body panel had come loose during the race and was quickly repaired by mechanics in the pits. Those repairs were something that the race-winning car did not feature, with McLaren and Donohue’s car being the only one to receive them. Not only that, but Glickenhaus’ car also had a dent from when McLaren is known to have thrown his helmet against the side of the car when that piece of bodywork had come loose.

That’s the car that was in Glickenhaus’ collection, and that’s how he concluded that he had car No. 2, chassis J6 in his possession as driven by McLaren and Donohue to a fourth-place finish, instead of the race-winning chassis J5 driven by Foyt and Gurney.

But what about the “Gurney bubble” — why did Glickenhaus’ car have it — and how did this mix-up happen and go undetected for decades all while the automaker held out the fourth-place finisher as the race-winning car?

“J5 was not repainted after Le Mans but J6 was painted as a clone of J5 by Ford and a Gurney bubble was added and she was sent on the auto show circuit,” Glickenhaus wrote in a forum post a few years ago. “For years J6 was thought to be the Le Mans winner.”

“Ford Cloned J6 and J7 at one time and sent them around as “The Le Mans Winner,” Glickenhaus added.

After discovering the true history of his car, Glickenhaus had chassis J6 painted back to its yellow Le Mans livery and its correct number, but he kept the Gurney bubble to make the car more comfortable to use as a driver.

Before you have a heart attack at the thought of a Le Mans-racing Ford GT40 braving New York area roads and traffic, the curious thing about mythical-level race cars is that they cannot really be devalued by putting tens of thousands of miles on them, even though in practice very few collectors do so. That’s because the value of a GT40 with Le Mans history mainly rests not in the machine itself but the fact that it ran in Le Mans.

As they say in the car collector world, “you buy the serial number, and the rest is just bodywork.” It’s a funny thing to contemplate, but that’s why people pay hundreds of thousands for basket cases that are at times just as engine and a serial number, and the rest is “bodywork.” So Glickenhaus could register this GT40 as a (slightly cramped) Uber, add tens of thousands of additional miles, and it wouldn’t lose value.

In fact, we’ve noticed that well-exercised cars with racing history that haven’t sat in dusty museums tend to generate more interest from collectors, because museum cars and cars from some vault-type collections tend to get very stale very quickly if not exercised properly. This is why rubber hose and gas tank replacements on Ferraris stashed away in the 1980s will easily run up a bill for over ten thousand dollars after a month-long recommissioning at an official dealer or specialist, assuming nothing else went wrong.

The lessons of this story are twofold. First: Making clones of a race-winning car by repainting other Le Mans race cars could cause headaches decades later. And second: Cars are meant to be driven.