Andrew Rackstraw has taken complete control of the 2021 Investchem Formula 1600 championship — the Cape Town driver picked up where he left off at home with another double victory off pole position at Zwartkops on Saturday.
Having dropped just one point of a possible 44, Rackstraw benefited chief rival Nicholas van Weely losing time recovering from an off after his throttle stuck in the first heat to miss the points before bouncing back with a strong second in the second race as youngsters Josh le Roux, Jarrod Waberski and Alex Vos picked up the pieces. 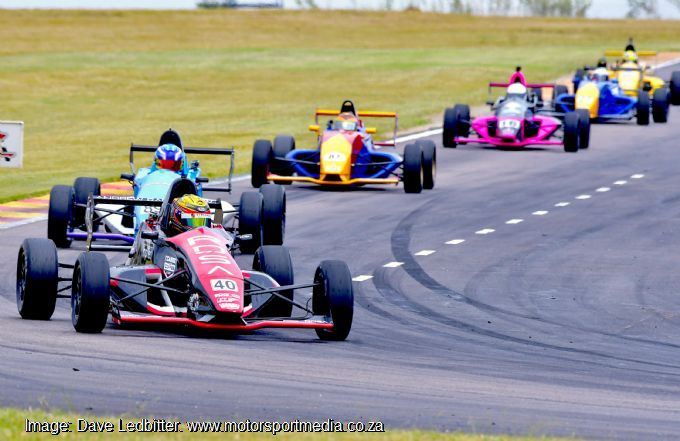 Rackstraw once again made his intentions known with a powerful Friday practice performance, but Pretoria dawned dull and cold Saturday, throwing much of that preparation off. Still Andrew kept his cool to put the Investchem Race Driver SA Mygale on pole position, 0.2 seconds ahead of impressive young rookie Josh le Roux’s ILCA New Heights Hegdek Cloud Mygale, with van Weely third in his Magnificent Paint & Hardware Van Diemen.
Three more young chargers, Ewan Holtzhausen’s Total Plastics Mygale, Alex Vos in his DV Building Supplies Ecurie Zoo Van Diemen and Jarrod Waberski’s DAW Mygale were next up, ahead of brothers Antwan and Gerard Geldenhuys’ Abacus Divisions Mygales. Dean Venter was drafted into the Investchem Safair Mygale SJ to substitute for Andrew Schofield at the last moment to grid ninth from Brendan Tracey’s Investchem Mygale.
Rackstraw made no mistakes as he blitzed off the start to lead the similarly quick-starting van Weely. Le Roux held a watching brief ahead of a keen mid-pack spat between Holtzhausen, Vos, Waberski and Venter, who both came through from the back. There was splendid action amid that mid-pack bunch, during which Holtzhausen took an off track excursion to drop back as Waberski and Venter put Vos under pressure with Rackstraw in control.
There was late drama when second man van Weely went straight on at the table-top with a couple of laps to run. He limped through the gravel, but was last when he rejoined the track. So Rackstraw cruised to the win, setting the fastest lap en route. A delighted Josh le Roux was gifted second by van Weely’s misfortune as Vos held Waberski and Venter at bay for third ahead of Gerard and Antwan Geldenhuys, Tracey, Holtzhausen and van Weely.
Rackstraw was the only car in the 1 minute 3 second bracket in race 1, but van Weely kept him honest in the second heat from second on the grid. The pair of them were never far apart throughout the 12-lap race, although van Weely was unable to launch a proper attack. There was more entertainment behind them as le Roux held a charging Waberski and Vos behind after Holtzhausen again took an off-track excursion to exit that dice.
That left Gerard Geldenhuys to fend off Dean Venter for sixth with Antwan Geldenhuys next up from the recovered Holtzhausen and Tracey. So overall, Andrew Rackstraw took the day off another doublewin, with young guns Josh le Roux, Jarrod Waberski and Alex Vos next up. Super sub Dean Venter wound up a fine fifth while dovetailing Polo Cup duties, from Gerard and Antwan Geldenhuys and the delayed van Weely and Holtzhausen, and Tracey.
All of which means Andrew Rackstraw is the man to beat in the 2021 Investchem Formula 1600 championship having scored both pole positions and won all four races so far. He is close to double the points clear of the fight for second between Jarrod Wabersk and Josh le Roux with Nicholas van Weely a probably less than indicative fourth after twice slipping from second in the opening heats, and Alex Vos right in there in fifth.
The 2021 Investchem Formula 1600 champion will take home R250 000 of the series R500K top three prize fund as well as prime GTC and Formula Renault test drives. Can anyone stop Andrew Rackstraw from taking those honours? Find out more at the next race at Aldo Scribante in Port Elizabeth on 29 May.